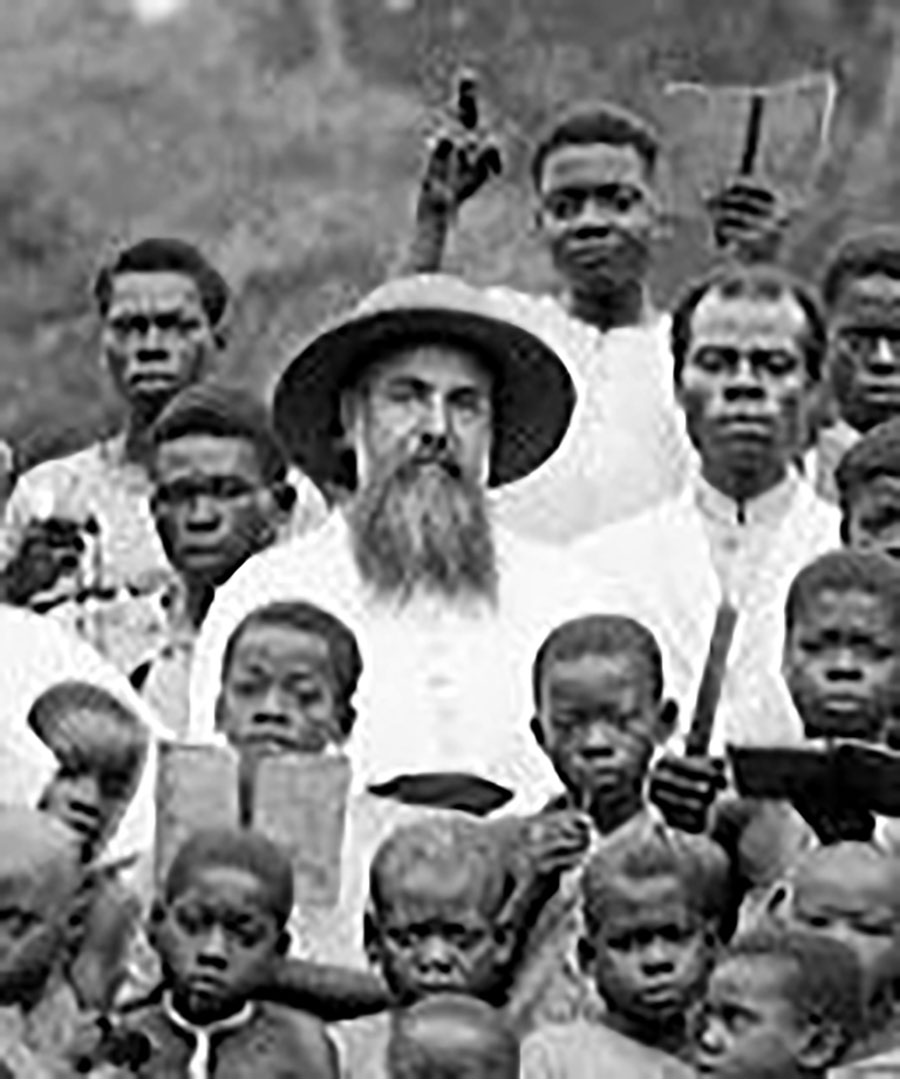 Father AymemÍ and his "beloved Bubis."   (Photo courtesy L’Association France-Guinée Équatoriale) Preface
To know the psychology of a village, a tribe, or of any race, it is an indisputable point that one must interpenetrate well into their ways and customs, their predominant ideas, their feelings, their manners of conduct, both with regard to the individual and family, and in their relations with strangers.
Now, to gain a perfect understanding of all of this, it is essential, of course, to understand and speak their language in the most precise way possible, which is to say, mastering their phrasing, their idioms, etc.
Based on this most important truth, the Catholic Church earnestly recommends to its missionaries who evangelize in infidel countries that they tenaciously procure the learning of the language of those indigenous persons who have been put under their special care.
And, concentrating now on the island of Fernando Poo, we have Reverend Father Pedro Sala, so appreciated by the Bubis of Batete, Musola, and Basakato because he understood them perfectly. The same could be said of he who was among the Bubis of Conception and Moka, the most virtuous Father Pablo Pardina, who translated for the Bubis of Biapa the catechism of B.P. Claret, which was printed on the Peninsula.
And what will I say of the author of this present work, The Bubis, by Reverend Father Antonio Aymemí, whose introduction I have the honor and pleasure to give to its readers.
God’s grace compelled him from the moment he arrived in these lands in the year 1894, and very soon he could understand the indigenous, and they he, and he could probe into their most intimate ways.
Fruit ripened in all of his studies, in all of his works, in all of his investigations, and in all of his repeated forays on this Fernandian island for a space of more than forty-five consecutive years. His dedication brought about his Bubi Grammar and Dictionary and, more in particular, this present work, The Bubis, in which he wonderfully explains, enumerates, and describes each and every one of their customs, from birth to death.
Many times I have heard asked by way of complaint: “Why doesn’t someone write an illustrated work in which the ancient customs of the Bubis are described, to have a record for posterity so they won’t be lost to oblivion?” Well, from now on, whenever that questions is asked it can be answered: “Take and read the work The Bubis by the worthy missionary Reverend Father Antonio Aymemí, and in that you will find all that you desire.”
If only it also would be read by the Bubis! In it they could see that which was of their ancestors and the huge changes that have happened since their time to the present-day. And, comparing the past with the present, they would be moved to a hymn of gratitude to the Catholic religion and Mother Spain who have covered their brothers with their flag of protection, elevating them to a higher level of culture and leading them from any poor practices that may remain from those ancient superstitions this book so simply and naturally relates.
Reverend Father Antonio Aymemí receives the tribute and most sincere admiration from his old companion, who arrived in the colony, as did he, in 1894.
-Isidoro Abad, C.M.F.
Banapá, the feast of Corpus Christi, 1940